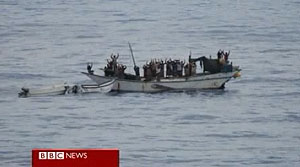 Robert Farley passes along the news that a Dutch naval vessel raided a pirate ship this weekend but then released all seven captured pirates because NATO has no authority to arrest pirates:

This, my friends, is not change we can believe in. Especially since the same thing happened again yesterday; a Canadian frigate operating under NATO authority chased down a group of pirates over the course of seven hours, forced them to surrender at gunpoint, and then released them….I’m reluctant to join in the right-wing chorus of denunciation against bureaucrats and lawyers, but someone somewhere in NATO has screwed up badly. There isn’t the faintest question that Canada and the Netherlands have the authority to arrest and collect evidence against pirates, and the idea that the aegis of NATO would make that impossible is infuriating.

Anybody feel like defending the bureaucrats and lawyers here?  Anybody?