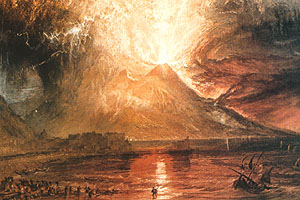 Here are two miscellaneous factlets that have caught my eye recently.  First up is On The Public Record, who is reading The Resilient City: How Modern Cities Recover From Disaster:

DAMN!  Cities NEVER give up.  Like, ever.  You cannot raze a city so bad that it goes away.  Like, some study showed that between 1100 and 1800, only forty cities stopped existing.   I suppose that makes sense.  I mean, the fact of a city not existing is so powerful that we remember it forever: Atlantis, Babylon, whatever that one was that got volcanoed.  I’ve been wondering if New Orleans and Galveston will be the leading edge of a new era of cities vanishing.  We’ll know in a generation, I guess.

Well, there’s always Carthage.  It can be done as long as you’re single-minded enough about the project.  Next up is Mark Kleiman, exploding an urban myth about marijuana cultivation:

Cannabis is not “the largest cash crop in California.” That zombie statistic has a history: during the collapse of the lumbering industry in the early 1980s, the Ag Department county extension agent in Humboldt County, which grows timber and pot, was so angry about the suffering he saw around him due to unemployment among loggers that when he filled out his annual estimates of crop-by-crop revenues for his county he listed pot as #1, using a completely made-up number. Dale Gieringer of California NORML then projected that out nationally to show that cannabis was the nation’s #2 cash crop, ahead of soybeans but behind corn (or maybe it was the other way around.) Since then, another NORMALista named Michael Gettman has produced even more fantastic numbers. In fact, the Abt Associates estimate put the total retail value of the cannabis trade at about $10b, about 15% of the total illicit-drug trade. That’s retail price, not farmgate price. And not all of that is grown domestically; some of it comes from Mexico, from Canada, and from Jamaica.

No special axe to grind on either one of these things.  Just thought I’d share.

The myth about salting the earth, etc, for Carthage is just that — a myth. Yes, the Romans trashed it, but it was such a logical trading spot that it was rebuilt, and by 400 or 500 AD it was a wealthy city again.

OK, so Carthage doesn’t count.  Or does it?  If you destroy a city, drive out all the people, reduce everything to rubble, and then repopulate it a few decades later with your own people, is it really the same city?  Or is it a different city of the same name in the same place?  Hmmm.  Is there a philosopher in the house?  Did Shakespeare really write all those plays?  Or some other guy named Shakespeare?