Valuing mortgage-backed toxic assets is hard.  They’ve been sliced and diced and synthesized and swapped so thoroughly that by now no one knows quite what’s in them or what they’re worth. 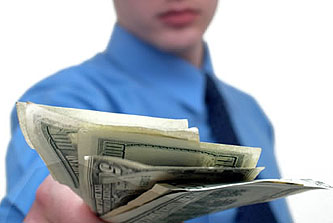 So Tim Geithner has a plan to jump start the sale of these assets and try to get the market to value them.

Fair enough.  Maybe it will work, maybe it won’t.  But Zach Carter wants to know why so much of Geithner’s plan isn’t aimed at toxic securities at all.  It’s aimed at toxic loans, and those aren’t nearly so hard to value.  Banks do it all the time.  So what’s going on?

A bank that trades heavily in mortgage-backed securities is in trouble if the market for those assets dries up — and it has, and they are — but regular loans are different. So long as a bank intends to sit on them and collect the interest rather than sell them to another company, the government lets that bank use its own secret financial formula to determine the loan values. In short, banks have carte blanche to claim their assets are worth far more than they really are….

Given this long leash, banking executives have naturally inflated the book value of their mortgages. And even as more and more of their customers fail to make payments, bankers have proved reluctant to admit their hubris and take a hit on the balance sheet. Why is that? Well, the government says banks have to keep enough assets on hand to cover their behinds if things go south. So if a bank that has foolishly overextended itself admits it was overvaluing its loan assets all along, it will fall short of this critical regulatory requirement. And when that happens, under the “prompt corrective action” laws enacted after the savings and loan crisis of the 1980s, federal regulators are obliged to invoke the N-word: nationalization.

But Geithner’s plan is voluntary, meaning that if the naughty banks don’t like the price that hedge fund investors are offering, they can simply turn the deal down. And no bank on the precipice of nationalization is going to voluntarily sell loans to Wall Street for less than it has been claiming they’re worth. Doing so would be corporate suicide. Instead, the only way a troubled bank will likely participate is if it receives an absurdly generous price for its dubious assets — a full-fledged bailout, in other words.

Carter’s basic thesis here is that while the Geithner plan in general is likely to subsidize the price of toxic assets, thus propping up insolvent banks, this subsidy is at least fairly subtle — and maybe even defensible — in the case of complex mortgage-back securities.  But in the case of ordinary loans, the subsidy is blatant and entirely indefensible.  Its only purpose is to keep banks out of receivership by literally shoveling money into their laps.

My first thought when I read this was skepticism.  The Geithner plan has come under a ton of criticism, but this particular criticism is one I haven’t really heard before.  That seems odd, since there are plenty of smart people who’d be happy to jump on this bandwagon if it’s really as bad as Carter says.

So here’s the deal: hopefully some smart critics of Geithner’s plan will read this piece and talk about it.  Is there something missing here?  Or is Geithner’s plan worse than even its critics think?