Christopher Orr weighs in with a utilitarian argument about why torture is bad:

When a group of combatants are badly outnumbered, or surrounded, or otherwise very, very unlikely to win a conflict, they have a considerable incentive to surrender — 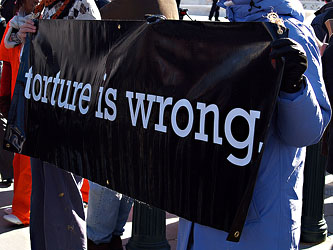 but only if they believe they will subsequently be treated with mercy. That is why individuals, and nations, surrender. The humane treatment of surrendered captives, therefore, is a crucial — arguably the crucial — understanding between adversaries if their conflict is to end in any way other than with the wholesale slaughter of the losers.

If arguments like this persuade anyone, I’m all for them.  Any port in a storm.  But ultimately these exercises in logic chopping never work.  Is torture OK against an enemy that refuses to give up?  Is torture OK in a non-combat setting?  Is torture OK if you somehow convince yourself that it will save the lives of your enemy in the long run by ending the war sooner?  In the end, you can always chop the logic a little bit finer if you’re minded to.  It just doesn’t work.

I don’t have either the vocabulary or the literary sensibility to explain with any eloquence why I oppose torture, so I usually stay out of conversations like this.  Besides, they depress the hell out of me.  But for the record, it goes something like this.

The whole point of civilization is as much moral advancement as it is physical and technological advancement.  But that moral progress comes slowly and very, very tenuously.  In the United States alone, it took centuries to decide that slavery was evil, that children shouldn’t be allowed to work 12-hour days on power looms, and that police shouldn’t be allowed to beat confessions out of suspects.

On other things there’s no consensus yet.  Like it or not, we still make war, and so does the rest of the world.  But at least until recently, there was a consensus that torture is wrong.  Full stop.  It was the practice of tyrants and barbarians.  But like all moral progress, the consensus on torture is tenuous, and the only way to hold on to it — the only way to expand it — is by insisting absolutely and without exception that we not allow ourselves to backslide.  Human nature being what it is — savage, vengeful, and tribal — the temptations are just too great.  Small exceptions will inevitably grow into big ones, big ones into routine ones, and the progress of centuries is undone in an eyeblink.

Somebody else could explain this better than me.  But the consensus against torture is one of our civilization’s few unqualified moral advances, and it’s a consensus won only after centuries of horror and brutality.  We just can’t lose it.