Are churchgoers nicer people?  After reading some recent polling showing that churchgoers are more likely to support torture, I find that a hard sell.  Still, Robert “Bowling Alone” Putnam says the answer is yes: in fact, churchgoers are so nice they even let people cut in line in front of them more often than others. 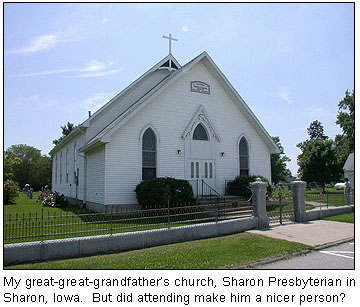 But does going to church cause you to be nice?  Or do nice people just like hanging out in churches?  Michelle Cottle reports:

Columnist E.J. Dionne (reading my mind) asked Putnam about the degree to which this phenomenon can be explained by the self-sorting joiners-are-joiners principle. After all, it’s well established that people’s personal relationships and social bonds in general are a huge predictor of how happy and, almost by definition, how engaged they are. Isolationism is good for neither the soul nor the community….Putnam acknowledged that it’s tough to tease out such causal relationships. He did point to one aspect of their research that seemed to indicate that religious participation actively propels people up the niceness scale. By going back a year after first interviewing people and conducting a follow up, he and Campbell were able to track behavioral changes among interviewees who had, in the meantime, become more frequent churchgoers. In those cases, niceness indeed tended to rise with participation.

….Coupled with Putnam’s findings that young people today are significantly more secular than previous generations, this raises some troubling questions about our civic life going forward. Although, before any Jerry Falwell types start wagging their pious fingers, note that Putnam’s research also suggests that the rise of the Christian Right and its politicization of religon played a major role in driving young people out the church. Luring them back, he argues, calls for decoupling faith and politics once more. Unhappy news for some of the old-school demagogues who have made their career flogging this union. But a very welcome prescription for the rest of us.

Well, I’m not sure how unwelcome this news really is, but I’ll let that slide for now.  Europeans seem to be just as nice now as they were back when they went to church a lot.  Maybe nicer, in fact.  Nonetheless, check out that final conclusion: if you turn your church into an arm of the Republican Party, your fortunes are then tied up with the fortunes of the Republican Party.  That worked pretty well for conservative evangelicals for a couple of decades, but now the tide has turned.  Perhaps the answer is for young people to start joining nicer churches and avoiding the culture warriors.  That would be good for both niceness and churchgoing.