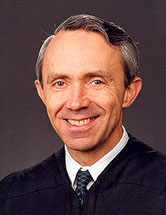 Looks like Obama gets to put one more thing on his plate:

NPR has learned that Supreme Court Justice David Souter is planning to retire at the end of the court’s current term.

….Souter is expected to remain on the bench until a successor has been chosen and confirmed, which may or may not be accomplished before the court reconvenes in October.

At 69, Souter is nowhere near the oldest member of the court, but he has made clear to friends for some time now that he wanted to leave Washington, a city he has never liked, and return to his native New Hampshire.

This won’t change the ideological makeup of the court a lot, but it will probably move it to the left both a little more reliably and for a longer time.  Plus it’ll give conservative activists another thing to go bananas over now that the tea parties have run out of steam.  That should be entertaining.