Leaving aside Jonah Goldberg’s contention that Sonia Sotomayor is “the most left-leaning Hispanic possible/confirmable” Supreme Court nomination, this actually strikes me as an interesting point:

If Obama picked a centrist, opposition would have been principled, 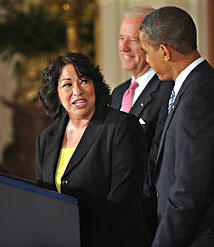 but pro-forma. By picking Sotomayor, conservatives will no doubt demand full-throated opposition, which plays perfectly to Obama’s purposes (so long as he doesn’t dump Sotomayor for some, any, reason). I don’t think this was the key factor in his decision, but you can be sure the White House will love casting conservative opposition in those terms.

I also doubt that this was a key factor, but it wouldn’t surprise me if a few people in the West Wing did indeed figure that this was a nice bonus.  The wingnut wing of the Republican Party seems hugely energized by Sotomayor’s nomination and ready to go ballistic over it.  This might be good for them in the short term (it’s a nice fundraising opportunity, brings internal factions together, etc.), but Obama, as usual, is looking a few moves ahead and understands that a shrieking meltdown from the usual suspects will mostly help the liberal cause: the American public already thinks the conservative rump running the Republican Party is crazy, after all, and this will help cast that feeling in stone.  Most normal people think empathy is a good thing, not a code word for the dictatorship of the proletariat.

And Obama?  He gets to be the calm at the center of the storm, providing his usual striking contrast to the seething stew of preachers, radio screamers, and Gingrich acolytes who will be making themselves ever more tiresome to Mr. and Mrs. Heartland with their ranting jeremiads.  I don’t blame conservatives for opposing Sotomayor even though they know that she’d only be replaced by someone equally liberal if they did somehow manage to derail her (liberals did the same with Roberts and Alito, after all), but if they’re smart they’ll realize that the usual shriekfest is playing right into Obama’s hands.

But they’re not smart, are they?