Via Andrew Gelman at the Monkey Cage, here’s a cool chart showing changes in attitudes toward gay marriage at the state level.  (The original paper is here.)  Andrew says there’s all sorts of cool statistical wizardry involved in creating it (“multilevel regression and poststratification”), but the bottom line is not just that attitudes toward gay marriage are becoming more liberal everywhere, but that they’re becoming more liberal fastest in the states that were most liberal to begin with.  Andrew is surprised by this (“I generally expect to see uniform swing, or maybe even some ‘regression to the mean'”) but I don’t think I am.  My guess is that there’s some kind of positive feedback for these kinds of things, where more liberal attitudes feed on themselves as the resulting change turns out to be fairly obviously benign or even beneficial.  Andrew has a couple of other plausible explanations too.  For now, though, just revel in some cool chartmaking and the good news it conveys. 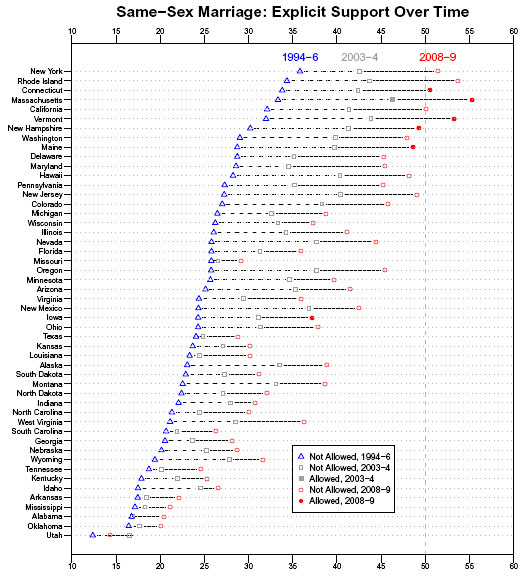