It’s still good advice to say that we should wait until tomorrow, when the administration’s new financial regulations are formally unveiled, before we start taking potshots at them.  But if Binyamin Appelbaum’s report in the Washington Post is on target — well, we might as well get started today after all.

Let’s see.  The SEC will expand its database of securities and will “encourage” the adoption of standardized contract language.  Yippee. 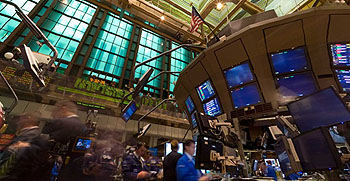 Credit rating agencies will be required to make “a clear distinction” between the ratings assigned to asset-backed securities and other forms of debt such as corporate bonds.  This is about #287 on the list of regulatory problems we need to solve.  And then there’s this:

Sales of asset-backed securities provided the bulk of funding for mortgages and other consumer lending during the economic boom, as investors spent trillions of dollars buying what was often advertised as a safe, more lucrative alternative to ordinary bonds….The administration concluded that securitization encouraged looser lending standards, because companies that sold loans to investors had little reason to care whether borrowers could repay those loans.

….The administration’s proposal is not just an attempt to clean up the securitization market. The goal is also to help revive that market, which has seen almost no activity in the last year….The final component addresses financial incentives, for instance requiring firms to retain a [5%] stake in each security. The plan also would prohibit firms from hedging that risk, meaning that they could not make an offsetting investment.

Are they kidding?  First, how do you prevent banks from hedging risk?  There are just too many clever ways to do it.  The SEC will never be able to keep up with this.  Second, 5%?  Seriously?  What’s the point?  There are lots and lots of recklessly constructed securities that are enormously profitable even if you know to a near certainty that you’re likely to lose 5% of the value sometime down the road.  That’s not nearly enough to rein in the bubbling endorphins and giddy short-term greed that drives credit bubbles.  And it’s especially not enough if Wall Street continues paying its traders and executives based on how much money they earned in the past 365 days.

Look: I’ll wait until tomorrow, and then listen to what smart people have to say about the full regulatory package.  But if this is the starting point of negotiations as this package heads off to Congress, things are really, really not looking good.