Exactly right. Nor do they understand connectivity and product overlap the way Google does. Google connects your email, chat, documents, search, and even browser now, etc. into basically one product, and with upcoming innovations like Wave and their OS that connectivity and overlap will just become far, far more effective. (Apple has done this fairly well also with hardware added into the mix)

Microsoft has tried with “Windows Live” and all that, but there are just too many gaps, too many brands, etc. I mean “bing” is now part of the whole cadre of Microsoft products, but is it really tied into them well? Why Microsoft hasn’t made their Windows platform more webby is beyond me. And why they make it so difficult to integrate everything is also confusing.

I’m out of touch on this stuff these days, but in fairness to Microsoft, doesn’t a lot of this have to do with antitrust rules that don’t allow them to integrate everything the way they’d like to? 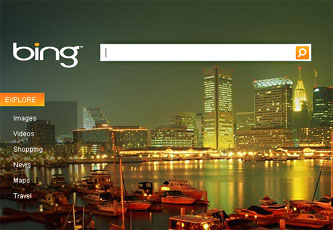 My understanding has always been that if they could get away with it they’d basically merge every piece of software they own into a single platform and then make it next to impossible to use anything else.  But they can’t.

In any case, the motivation for the original post was David Pogue’s piece in the New York Times about Microsoft’s new search engine, Bing.  Anyone have any opinions they’d like to share on this?  I use it a lot for image searches, but not so much for ordinary text searches.  Partly this is because Bing doesn’t seem to have an Advanced Search page, which means I’d have to memorize whatever Boolean concatenation rules they use if I want to do anything more complicated than a search for the latest Michael Jackson news.  Sure, that’s lazy of me, but Google works pretty well, so even a small nuisance makes all the difference between using something new and skipping it.

On the other hand, it’s sort of interesting to see what Bing comes up with in its “Related Searches” list.  If I type in my name, I get a bunch of expected stuff, but also Maitland Ward.  Huh?  Who’s that?  (Says here that she’s an actress born in Long Beach who attended the same university as me.  Is that all it takes?)  But even at that I’m lucky.  Matt Yglesias gets paired up with Michelle Malkin and Ann Coulter.  Atrios gets Michelle Malkin and Atrio Insurance.  Jane Hamsher gets Bill Clinton.  (She also gets Jane Hamsher Death, which seems kind of ghoulish.)

Oh, and I like the background artwork on the Bing home page.  Very soothing.  Not enough to make me switch from Google on a regular basis, but soothing anyway.