When I reviewed Jon Cohn’s Sick a couple of years ago for CJR, I concluded with this:

The format of Sick almost begs for narratives about overseas health care systems. The book is basically a tour around America, with each of its eight chapters named after the place in which its story unfolds. 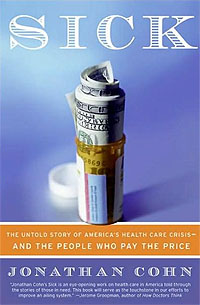 So why not include chapters on Manchester, Malmö, and Marseilles, each of them highlighting in narrative form both the good and bad points of the British, Swedish, and French systems?

Naturally, then, I’m delighted that Jon found someone to fund exactly that:

Last year, I had the opportunity to spend time researching two [] countries: France and the Netherlands. Neither country gets the attention that Canada and England do. That might be because English isn’t their language. Or it might be because they don’t fit the negative stereotypes of life in countries where government is more directly involved in medical care.

….In the course of a few dozen lengthy interviews, not once did I encounter an interview subject who wanted to trade places with an American. And it was easy enough to see why. People in these countries were getting precisely what most Americans say they want: Timely, quality care. Physicians felt free to practice medicine the way they wanted; companies got to concentrate on their lines of business, rather than develop expertise in managing health benefits. But, in contrast with the US, everybody had insurance. The papers weren’t filled with stories of people going bankrupt or skipping medical care because they couldn’t afford to pay their bills. And they did all this while paying substantially less, overall, than we do.

Forget Canada and Britain.  Neither one is even remotely close to the kind of system we’d ever put in place in the U.S.  France’s system, however, is surprisingly American in its basic underpinnings.  And while no system comes out tops in every single metric, French healthcare, as Jon says, is better than ours on almost all of them and does it for close to half the cost.

Now, the fact that the French spend about half what we do doesn’t mean that we’d cut our costs in half if we adopted a French-style system.  We wouldn’t.  There’s too much path dependence and too many cultural differences for that.  But what it does mean is that if we adopted something close to their system, we could certainly achieve high-quality 100% basic coverage — with the ability to purchase extra coverage for anyone who wants it — for no more than we spend now and possibly a bit less.

We won’t, of course, because too many people are still convinced that healthcare in the United States is better than it is in France — or anywhere else.  It’s not.  It’s worse and more expensive.  Somebody tell Max Baucus.

UPDATE: Matt Yglesias says that Max already knows.  I figured as much.