In early 2002 Del and Barbara Spier filed for bankruptcy.  Their Houston-based private investigations firm, the Agency for Investigation and Protective Services, was dead.

But thanks to the war in Afghanistan, that turned out not to be a problem. 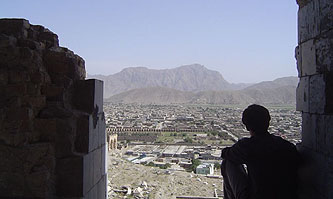 They immediately started up a brand new company, US Protection and Investigations, and got themselves a lucrative contract providing war zone security:

….By 2006, USPI claimed to employ more than 3,000 Afghan guards, along with 160 US and expat employees, and had a significant presence throughout the country, especially in Kabul, where guard shacks bearing its logo were a common sight. “It basically grew into a monster,” the former Berger official says. On its website, the company described itself as “the foremost private security company working in support of Operation Enduring Freedom in Afghanistan.” Its stated goal? To “help bring about change and improvement for the people of Afghanistan.”

Without question, USPI’s role in Afghanistan had brought about change and improvement for the Spiers. In Kabul, they took up residence in a luxurious compound that some of their employees jokingly called the “marble palace.” In their bedroom, an ex-employee adds, was a safe that sometimes contained upward of $1 million cash, used to bankroll USPI’s operation.

The former USPI security coordinator told me, “I remember at one point seeing boxes of cash that they were bringing in. I thought, ‘Wow, that’s really fucking weird.'”

Not just weird, it turned out, but completely illegal.  The whole operation was a gigantic fraud, and in 2007 it finally came to an end when USPI’s office in Kabul was raided and shut down.  “Have you ever seen a dynamic entry, where people are clearing rooms out with guns locked and loaded and shoving a gun in your face?” said a former USPI supervisor.  “That’s the way Blackwater did their entry into the house.”

If you want to find out how the Spiers pulled it off — and how they finally got caught — Daniel Schulman has the rest of the story here.  It’s worth a read.