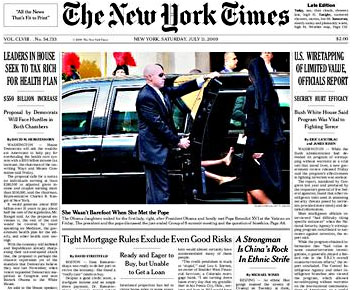 The New York Times is considering charging half a sawbuck per month for online access, and Michael Crowley approves:

Given that some people spend $5 per day on coffee, paying that much per month for online access the best newspaper in the world strikes me as an absolute no-brainer. I myself would pay twice as much. I hope the idea catches on, and I hope this marks a shift from the days of newspapers panicking to the start of successful new business models.

I’m a little torn here.  I don’t have any problem with paying for the Times.  I already pay for the Wall Street Journal online, for example, and I figure that’s just part of the job.  But if the Times does go this route, I hope they provide some mechanism for providing short-term public links to individual articles.  I generally try not to link to pieces that readers can’t click through to read themselves, partly as bloggy courtesy and partly because it’s one of the things that keeps bloggers honest.  If the Times blocked off online access completely to nonsubscribers, I’d link to them way less and would therefore find them way less useful.

As for the broader question of whether this will work, it’s hard to say.  On the one thand, we’re rapidly entering an era in which the Times is almost literally the only top notch general purpose newspaper in the country, now that the LA Times and Washington Post seem to be in death spirals.  That means less competition, which in turn means that if you really care about serious news, you don’t have much choice except to pony up.

On the other hand — well, the Post and the LAT aren’t that bad, and McClatchy and AP and the Guardian and the BBC and NPR and all the cable nets are still around.  The Times has them beat on a number of scores, but you still have to be a real news junkie before you’re going to be unsatisfied with the flood of news from other outlets.  And I’m just not sure how many serious news junkies there are out there who don’t already subscribe to the print edition.

But on the third hand, online advertising seems to have collapsed so completely that it’s hard to see the downside of charging for access.  Even if it only brought in a few million dollars a year, that’s probably more than they make from online ads these days.  So what’s the harm in trying?