In the New York Times this weekend, Emily Bazelon interviewed Supreme Court Justice Ruth Bader Ginsburg.  In the LA Times this morning, Jonah Goldberg read the interview, chopped off a Ginsburg quote about Roe v. Wade halfway through, and then asked this:

Unlike Bazelon, I for one would like to know whether Ginsburg believes there were — or are — some populations in need of shrinking through abortion and whether she thinks such considerations have any place at the Supreme Court.

And while we’re at it, it would be interesting to know what Supreme Court nominee Sonia Sotomayor thinks about such things.

Yes indeed.  Goldberg is seriously suggesting that maybe Supreme Court Justice Ruth Bader Ginsburg believes we should try to shrink a few of our less desirable ethnic populations by providing them with increased access to abortion.  And then, just for the hell of it, he thinks we ought to find out whether Sonia Sotomayor thinks the same thing.

Needless to say, Ginsburg believes nothing of the sort.  You only have to read the sentence right after the one Goldberg quoted to see that. 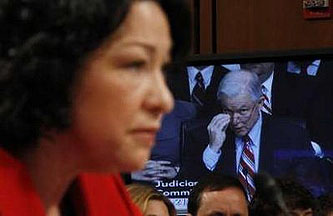 And Sotomayor, of course, has absolutely no connection to this at all.  Isaac Chotiner has the details here.

The almost manic eagerness of the right to inject race into the Sotomayor nomination at every opportunity is enough to make you ill.  It started within minutes of her nomination being announced, and it’s continued ever since.  Sen. Jeff Sessions took up the reins today.

There’s never been any reason for it, of course.  It was ostensibly based on one sentence in a speech and one court decision out of hundreds she’s made.  In reality, it’s just because she’s a Hispanic liberal and conservatives figure that a race-based attack is the one most likely to resonate with their base.  And I suppose they’re right, aren’t they?