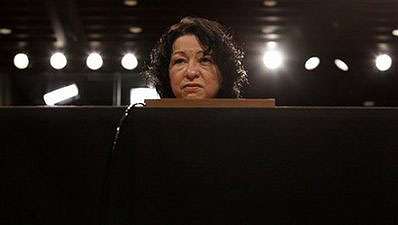 Supreme Court nominee Sonia Sotomayor maneuvered through three days of an often-antagonistic confirmation hearing by portraying herself as a legal mechanic who would stick to precedent and never “make law.” But in doing so she revealed almost nothing about the philosophy that would guide her on the high court.

It is not clear whether this play-it-safe strategy was a political calculation, perhaps dictated by the White House, or an accurate reflection of her background as a lower court judge who has not formed broader views on the law.

“It is not clear”?  Spare me.  It’s crystal clear.  Back in the pre-culture war era, senators asked nominees questions and nominees more or less answered them.  And then, unless someone produced incriminating photos with a sheep, the nominee was confirmed.  A mere 20 years ago, Antonin Scalia, now a bête noire of the left, was confirmed unanimously after Ronald Reagan nominated him to the court in 1986.

But then things changed.  Robert Bork got borked in 1987.  David Souter and Anthony Kennedy turned out not to be as conservative as conservatives had hoped.  Clarence Thomas blasted his nomination hearings as a “high-tech lynching” and was only barely confirmed.  And everybody learned their lesson from this: nominate candidates whose views are clear (no more Souters!) and then make sure they say absolutely nothing about those views (no more Borks!).  Ginsburg and Breyer invented the technique, Roberts and Alito honed it, and as near as I can tell, Sotomayor has taken it to its reductio ad absurdum apex.  If it’s something that might come before the court in the future (and everything comes before the Supreme Court eventually), tell ’em it would be inappropriate to answer.  If someone asks a more general question, say that you can’t really answer in the abstract.  If more details are provided, switch gears and say that you can’t engage in hypotheticals.  As near as I can tell, Sotomayor was barely willing to admit that she had a law degree, let alone that she had any opinions whatsoever regarding the law.

But look — that’s the way the game is played these days.  Of course it was a political calculation.  Does anyone really seriously doubt this?