Jon Stokes has more about high frequency trading over at Ars Technica.  His piece doesn’t address the allegations that HFT shops engage in front running (i.e., sneaking a look at stock prices a few milliseconds before anyone else), but focuses instead on “pure” HFT strategies.  For example:

One of the most important uses for HFT is to get the best price for very large stock orders by breaking them up into small orders of random sizes and hiding the activity from other traders, who, on sensing that a large order is in progress, might take advantage of that knowledge by making moves that would impact the stock price…. 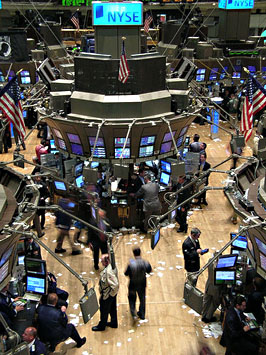 Some categories of “predatory algos” closely monitor the markets in order to sniff out exactly these types of hidden large orders, so that the algo can trade against them. For instance, if a predatory algo detects that someone is trying to hide a large sell order for [Intel] by trickling it out into the market in small blocks, it might work to bid down the price of [Intel] just a bit so that it can pick up those blocks at a discount and then sell them for a profit when the share price floats back up to the market’s earlier, non-manipulated valuation.

It kinda reminds me of Charlie Stross’s fictional Economics 2.0 — an automated economy that runs so fast no human being can keep up with it.  In an interview at Felix Salmon’s blog, Stokes adds this comment about the allegedly gigantic trading profits generated by HFT:

To justify this $20B/year “fee” you have to make the case that the market system as a whole is getting something of value to all the payers in return. So supporters will say that it’s the price of liquidity and innovation, and, besides, they’ll argue, everyone who has been participating in the markets for decades has been paying these hidden liquidity taxes (and I’d rather call them taxes than fees) to specialists and any other market maker. But when you see this tax ballooning at Internet speed — much the same way that finance has ballooned as a portion of GDP — you have to take a step back and ask, “what is the real, fundamental benefit that we’re all paying for here when we collectively direct money into this?”

This, of course, is a question we’ve been asking about a lot of financial innovation lately: how, exactly, does it benefit anyone other than the tiny band of Wall Street zillionaires who collect fees from it all?  And Felix adds this:

My bottom line is that HFT is a black box which very few people understand, and that one thing we’ve learned over the course of the crisis is that if there’s a financial innovation which doesn’t make a lot of sense and which is hard to understand, there’s a good chance there’s systemic risk there. Is it possible that HFT is entirely benign and just provides liquidity to the market? Yes. But that seems improbable to me.

John Hempton offers a contrary view here.  He’s very skeptical of the $20 billion number that’s been tossed around lately, and in any case says that trading is a whole lot cheaper today than it was in the past even if the HFT folks are skimming a cut off the top.  That’s unquestionably true, but I’m not sure it’s a very good defense.  If Wal-Mart overcharges every customer by a penny, it’s still wrong even if you’re saving money compared to the corner market.  Add in the potential systemic instabilities caused by the HFT black box, and I think the burden of proof should be on the high frequency community to convince us that what they’re doing is safe and worthwhile, not the other way around.