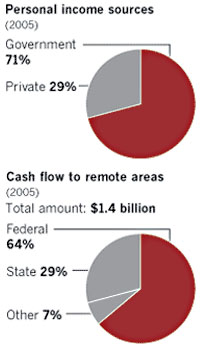 Kim Murphy of the LA Times reports from rural Alaska:

This summer Takotna, population somewhere between 46 and 61, has become one of the best-known villages in Alaska — thanks to the $18.7-million airstrip the federal government is funding on the edge of town. The 3,300-foot gravel runway, complete with night lighting, will replace the short one on a wind-swept hill where several planes have crashed.

….In an era of dwindling public revenue, even Alaskans increasingly wonder how much they can afford to support those who choose to live miles from civilization….According to the Institute for Social and Economic Research at the University of Alaska, about $1.4 billion a year in state and federal government subsidies, purchases and wages goes to more than 200 far-flung villages in the state — from the frigid Arctic coastal plain to the soggy, impenetrable tundra of the deep Alaskan interior. Federal dollars help pay for airline service and mail delivery, subsidize electricity rates and fund health clinics, among other things.

“Even Alaskans” wonder how they can support this?  Spare me. For the most part, “Alaskans” don’t.  The federal government does.  Alaskans could support these communities out of oil revenues, of course, but they choose instead to divvy up that cash into annual Christmas presents for themselves and then let the rest of the country support them.  See Charles Homans for more on this.

There’s nothing unusual about this, of course.  On a per capita basis, rural America receives far more federal cash and far more federal development aid than the rest of the country, but they’re also the ones who yell the loudest about big government and high taxes and standing on your own two legs.  Alaska just stands out more because their version of this hypocrisy is performed on a somewhat more spectacular scale.