In his new book And Then There’s This: How Stories Live and Die in Viral Culture, Bill Wasik talks to John Harris and Jim VandeHei, founders of Politico, about the kinds of stories they want to cover:

VandeHei mentioned the classic pseudo-event: a presidential press conference. At major newspapers like the Post, he said, “you feel this sense of obligation to lead your newspaper the next day 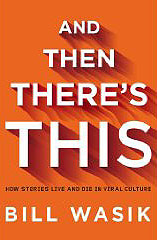 with a story about what Bush said at the press conference, even if he didn’t say anything that was all that revelatory, and despite the fact that it’s pretty damn stale: most news consumers have not only consumed it, they’ve digested it and moved on.”

He contrasted this with a recent Politico story that, he noted, the Post did not touch, that “ten years ago would have been confined to the inside pages of Roll Call“: the revelation that Rep. Loretta Sanchez (D., Calif.) had quit the Congressional Hispanic Caucus and alleged that its chairman, Rep. Joe Baca (D., Calif.), had called her a “whore.”

This story, VandeHei said, was “a perfect example of how media has changed. We put it upfront early on the webpage. Instantly it’s linked to by Drudge and all the other blogs; Fox News is doing a story based on it; MSNBC is doing a story based on it; and then the next day, on the Colbert Report, he does twenty minutes on ‘whore.’ So you have just, from this perch, been able to reach significantly more people than I would have reached even at the Washington Post.” The challenge for The Politico, he said, is “figuring out how to put things into that pipeline.”

Well, good for Politico.  But what happens when everyone decides to quit covering the “boring” stuff and just follow the Politico model instead?  Is this really a world any of us want to live in?

But I guess what’s most remarkable about this isn’t that Politico was the first to popularize political gossip.  I suppose someone was bound to do it eventually.  It’s the fact that VandeHei sees their primary task as “putting things into that pipeline.”  Not just reporting and winning a reputation, even if it’s only for gossip, but feeding the outrage machine.  Only if a story has done that do they consider it a success.  What a sad career choice for a couple of highly regarded journalists to have made.