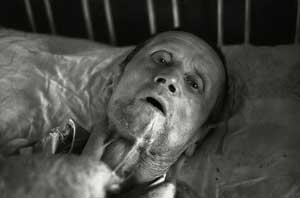 The big fault line in the healthcare debate right now is over the “public option” — a proposal that people should have the option of getting healthcare coverage from either a private insurance carrier or from a government program.  Conservatives are worried that this would put too much pressure on private insurers, but Michael Hiltzik asks the obvious question: who cares?

The firms take billions of dollars out of the U.S. healthcare wallet as profits, while imposing enormous administrative costs on doctors, hospitals, employers and patients. They’ve introduced complexity into the system at every level. Your doctor has to fight them to get approval for the treatment he or she thinks is best for you. Your hospital has to fight them for approval for every day you’re laid up. Then they have to fight them to get their bills paid, and you do too.

….Why do we tolerate this? The industry loves to promote surveys indicating that most Americans are “satisfied” with their current health insurance — 37% are “very satisfied” and 17% “extremely satisfied,” according to one such study.

Yet these figures are misleading. Most people are satisfied with their current insurance because most people never have a complex encounter with the health insurance bureaucracy. Medical care generally follows the so-called 80-20 statistical pattern — 20% of patients consume 80% of care. If your typical encounter is an annual checkup or treatment of the kids’ sniffles, or even a serious but routine condition such as a heart attack, your experience is probably satisfactory.

But it’s on the margins where the challenges exist. Anyone whose condition is even slightly out of the ordinary knows the sinking feeling of entering health insurance hell — pre-authorizations, denials, appeals, and days, weeks, even months wasted waiting for resolution.

Sounds great to me!  Why would anyone want to change this s

Health insurance is a weird industry.  Healthcare itself is provided by doctors, nurses, hospitals, pharmaceutical companies, hospices, and device makers.  Insurance companies do none of this.  They don’t do research, they don’t perform surgeries, they don’t change bedpans, and they don’t make diagnoses.  They’re just middlemen.  All they do is pay the bills after marking them up 30%.  They don’t do anything at all to make healthcare better or more efficient.

But for some reason we’re supposed to care about whether they continue to exist or not.  Why?  I care about the quality of my doctors, my nurses, the hospital I go to, and the drugs I take.  I don’t really care who takes on the administrative task of paying the bills — except that I wish they were handled a lot more efficiently and with a lot less hassle than private insurers typically do.  Frankly, a world without private healthcare insurers sounds pretty good to me.

And as long as we’re reading the LA Times, they’ve got a nice piece by Michael Rachlis, a doctor in Toronto, about the Canadian healthcare system.  Guess what?  It’s pretty good!  It’s not the system I’d choose — in particular, I think public funding should provide a basic level of healthcare but patients should always have the right to pay more for better care if they want to — but it works as well or better than ours for a fraction of the cost.  Read the whole thing for more.