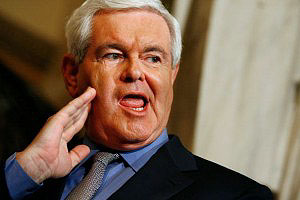 Matt Taibbi points out today that up until very recently, Newt Gingrich was a big booster of advance care directives and hospice care:

Well, what happens when suddenly the Republican party decides it wants to scare the shit out of a bunch of old people by telling them the new health care bill is going to include a provision in which “death panels” ask them “when they want to die”? Now all of the sudden Gingrich is violently against the same programs he was so windily praising earlier this year.

And make no mistake, this is exactly the same thing. The only thing that’s actually in the health care proposals is a provision that would allow Medicare to pay for exactly the kind of programs Gingrich praised, on a voluntary basis. The programs are not government-administered in any way, there’s just government money now to pay for the private programs. And now Gingrich is suddenly aghast at them.

Nobody ever accused Newt of not being opportunistic enough, so this is no surprise.  It’s also pretty much identical to his flip-flop on cap-and-trade.  Two years ago he was a huge fan because it used market mechanisms to control greenhouse gas emissions.  Hooray for the market!  But when an actual cap-and-trade plan was introduced — by Democrats — it suddenly became a “command-and-control, anti-energy, big-bureaucracy agenda, including dramatic increases in government power and draconian policies that will devastate our economy.”

But Newt’s a visionary.  Never forget that.