Joe Klein says the Republican Party has been taken over by “nihilists and hypocrites”:

An argument can be made that this is nothing new….There was McCarthyism in the 1950s, the John Birch Society in the 1960s. But there was a difference in those times: the crazies were a faction — 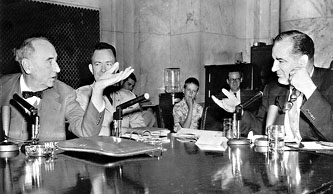 often a powerful faction — of the Republican Party, but they didn’t run it. The neofascist Father Coughlin had a huge radio audience in the 1930s, but he didn’t have the power to control and silence the elected leaders of the party that Limbaugh — who, if not the party’s leader, is certainly the most powerful Republican extant — does now. Until recently, the Republican Party contained a strong moderate wing. It was a Republican, the lawyer Joseph Welch, who delivered the coup de grâce to Senator McCarthy when he said, “Have you no sense of decency, sir, at long last?” Where is the Republican who would dare say that to Rush Limbaugh, who has compared the President of the United States to Adolf Hitler?

Yep.  Both parties have their extreme wings, but the GOP’s is not only way deeper into crazy land (“death panels” for them vs a public option for the most liberal Dems), but it’s virtually all they have left.  Michele Bachman is pretty much the modal Republican now, not just a fringe nutball.  Conversely, Dennis Kucinich, who’s far to the left but perfectly sane and coherent, barely gets the time of day from the mainstream core of the Democratic Party.

I don’t actually mind if most or all Republicans vote against healthcare reform.  They’re Republicans!  They’re opposed to expanded government programs and private sector regulation and new entitlements.  But the death panels and the home nursing inanity and the “healthcare racism” and the town hall screeching and all the rest are the mark of a party that’s gone completely off the rails.  They’re doomed until they figure out a way to extricate themselves from the Beck/Limbaugh/Fox News axis of hysteria.