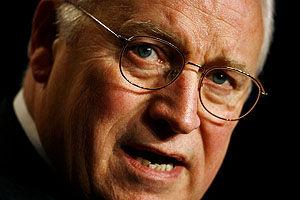 the recently released torture documents demonstrate that torture worked?  Back in April Dick Cheney said they would, but now that they’re out in the open he’s backing down:

The documents released Monday clearly demonstrate that the individuals subjected to Enhanced Interrogation Techniques provided the bulk of intelligence we gained about al Qaeda.

In case the fudge factor in that statement isn’t crystal clear, here’s a different version:

The documents released Monday clearly demonstrate that the individuals who received academic scholarships provided the bulk of the correct answers on final exams.

Well, no kidding.  But that doesn’t mean that getting a scholarship made you smart.  It means that scholarships were given to people who were already smart to begin with.  Likewise, the “enhanced interrogation techniques” were used on the prisoners who were the most valuable in the first place.  They would have provided the bulk of the intelligence no matter what we’d done.  Michael Scherer comments:

Now that the memos have been released — with redactions — they provide no clarity to the question Cheney claimed they would answer: Did the enhanced techniques produce results? Rather the two memos describe the value of information provided by Al Qaeda detainees, which one memo calls a “crucial pillar of counterterrorism efforts.” The memos, as redacted, are silent on the role of harsh interrogation in producing that information. One memo describes another effective technique — dubbed the “building block” process — that dd produce significant information. This process is an standard technique, of confronting one detainee with information from another detainee to produce more information. It does not involve any physical coercion. Does Cheney want other parts of the same memo, which were redacted in the latest release, made public? It is unclear.

(1) The fact that we are not really bothered any more by taking helpless detainees in our custody and (a) threatening to blow their brains out, torture them with drills, rape their mothers, and murder their children; (b) choking them until they pass out; (c) pouring water down their throats to drown them; (d) hanging them by their arms until their shoulders are dislocated; (e) blowing smoke in their face until they vomit; (f) putting them in diapers, dousing them with cold water, and leaving them on a concrete floor to induce hypothermia; and (g) beating them with the butt of a rifle — all things that we have always condemend as “torture” and which our laws explicitly criminalize as felonies (“torture means. . . the threat of imminent death; or the threat that another person will imminently be subjected to death, severe physical pain or suffering . . .”) — reveals better than all the words in the world could how degraded, barbaric and depraved a society becomes when it lifts the taboo on torturing captives.

We managed to get through WWI, WWII, the Korean War, the Vietnam War, the Gulf War, and a dozen smaller engagements without making the torture of prisoners into official government policy.  We can get through this one without selling our souls too.