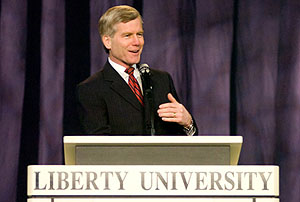 Virginia Republican Bob McDonnell is in trouble.  He’s running for governor, and a couple of weeks ago he happened to mention to a pair of Washington Post reporters that he had written his master’s thesis at Regent University on “welfare policy.”  So they went to the Regent library and took a look.  It turns out that “welfare policy” was a pretty bloodless way of describing it:

He described working women and feminists as “detrimental” to the family. He said government policy should favor married couples over “cohabitators, homosexuals or fornicators.” He described as “illogical” a 1972 Supreme Court decision legalizing the use of contraception by unmarried couples.

Oops.  He’s supposed to be a moderate conservative, you see. Michelle Cottle comments:

I find myself torn in this fight. In general, I find the obsession with politicians’ student writings excessive. Most of these papers spring from the  brains of people in their early- to mid-20s who have spent the past several years in the self-indulgent cocoon of academia.

….That said, Republicans are hardly in a position to gripe about this tendency. Anyone recall the frenzy the Right whipped itself into over Hillary’s thesis on Saul Alinksy or Michelle O’s thesis on black Princeton grads? The former ostensibly proved Hillary to be a socialist and the latter revealed Michelle to be a militant whitey-hating bigot. Ah, good times.

So we’re to judge Democrats by their academic ramblings but not Republicans? I think not.

I have a solution to this problem that I call the 25/25 rule: it doesn’t count if you did it more than 25 years ago or before your 25th birthday.  Obviously there are exceptions to this.  A major scandal (Watergate, say) or career accomplishment (passing a bill) should stay with you more or less forever.  Likewise, if you can show a consistent pattern of behavior, then the entire historical track record is fair game.

But for modest, one-off stuff like this, I think 25/25 works pretty well.  Sadly for McDonnell, he doesn’t qualify on either count: he wrote his thesis 20 years ago, when he was 34 years old.  So there’s no need to be torn: McDonnell was no utopian teenager scribbling out plans to save the world in the pot-ridden 60s.  He was a grown man writing during the first George Bush administration.  That doesn’t mean his thesis should disqualify him from office or anything, but it does mean that it’s fair for his opponents to bring it up in their campaigns.  It’s up to McDonnell to convince us that he doesn’t believe this stuff anymore.