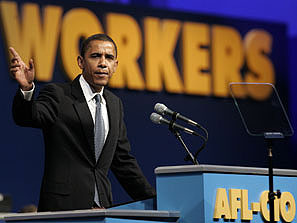 Both speeches were fiery, pro-union stem winders. Yet the president barely mentioned the top item on Big Labor’s 2009 political agenda, the Employee Free Choice Act….But the card check bill has struggled mightily on Capitol Hill and could clearly use a boost from the White House. Still, the president didn’t speak its name in Lordstown and devoted just a single sentence in Pittsburgh. Is that any way to treat the folks who poured tens of millions of dollars into Democratic campaigns last year?

I don’t know why Obama decided not to mention EFCA, but I’ll bet it was more tactical than anything else.  Keeping a low profile might just be the better strategy right now.  Arlen Specter, for example, now says that he’s a full-throated backer of EFCA, and he thinks other Democratic fence-sitters might be too.  Mark Kleiman comments:

The legislation no longer has “card check” (automatic unionization once 50% of the workers have signed a pro-union petition) but it has two other provisions that, between them, do almost the same thing:  snap elections and real enforcement of NLRB rules against union-busting.

And it has the provision that’s  more important than any of that:  binding arbitration on a first contract if the two sides can’t agree.   Right now, companies can just refuse to make a deal, wait six months, and then run a de-certification election (using the same dirty tricks they use in the initial elections) with the argument that “This useless union you guys voted for can’t even get you a union contract.”

If Specter is right — and telling the truth — about Nelson and Lincoln, this year might see the passage of the most important piece of pro-labor legislation since the Wagner Act.

I’m not sure Obama needed to talk about EFCA.  He had just slapped labor-pleasing tariffs on Chinese tires, his stimulus bill has created thousands of unions jobs, and he’s nominated three labor-friendly choices to fill vacancies on the NLRB.  Everyone listening to him knew that.  He can afford to keep EFCA under the radar for the time being.