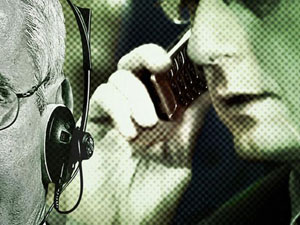 Via Atrios, here’s Al Franken giving one of Obama’s assistant attorney generals a hard time over the question of whether to extend a provision of the PATRIOT Act that’s due to expire at the end of the year:

Franken, who opened by acknowledging that unlike most of his colleagues in the Senate, he’s not a lawyer, but according to his research “most Americans aren’t lawyers” either, said he’d also done research on the Patriot Act and in particular, the “roving wiretap” provision that allows the FBI to get a warrant to wiretap an unnamed target and his or her various and changing cell phones, computers and other communication devices.

Noting that he received a copy of the Constitution when he was sworn in as a senator, he proceeded to read it to [David] Kris, emphasizing this part:  “no Warrants shall issue but upon probable cause, supported by Oath or affirmation, and particularly describing the place to be searched, and the persons or things to be seized.”

“That’s pretty explicit language,” noted Franken, asking Kris how the “roving wiretap” provision of the Patriot Act can meet that requirement if it doesn’t require the government to name its target.

Great stuff.  So liberals, who normally believe in a living constitution that changes with changing times etc. etc., are now hauling out black letter critiques of longstanding federal law.  (Roving wiretaps have been legal for several decades.  The PATRIOT Act merely extended them to national security cases.)  At the same time, you can revel in, for example, Peter Thomson of the Federalist Society, blandly affirming that a Ninth Circuit Court (!) opinion was “based on solid legal ground” when it reasoned

Italics mine.  Not the sort of reasoning the Federalist Society usually approves of, but any port in a storm, I suppose.

Personally, I’m inclined to stick to basic principles on this.  I really do believe in a constitution that adapts in obvious ways to changing times and technologies, and the framers pretty clearly didn’t anticipate wiretaps of any sort, let alone wiretaps on mobile phones or worldwide packet networks.  “Place” has one meaning when the state of the art in communication technology is paper and quill pen, which can exist only in specific, well-defined locations, but quite a different meaning when you’re tracking electronic signals through a globally distributed network and the access point to that network is entirely arbitrary and can exist literally anywhere on the planet.  Adapting to that reality doesn’t strike me as constitutional overreach.  (Conversely, warrantless wiretaps are fundamentally corrosive regardless of type, but that’s not an issue in this case.  Roving or not, these taps all require a judge’s permission.)

There are some obvious safeguards that ought to be in place with roving taps, and I don’t have any problem with tightening up the language if that needs to be done.  But given the reality of how technology has evolved, my instinct is that roving taps are a reasonable and constitutional response.  If I’m wrong, feel free to school me in comments.

UPDATE: It looks like I screwed up here.  Franken’s issue is apparently not with roving wiretaps per se, but with “John Doe” wiretaps aimed at individuals who are described but not specifically named.  Sorry about that.