Speaking of books, here’s a passage from Mark Kleiman’s When Brute Force Fails that I’ve been meaning to blog for a while:

Given the decrease in lead exposure among children since the 1980s and the estimated effects of lead on crime, reduced lead exposure could easily explain a very large proportion — certainly more than half — 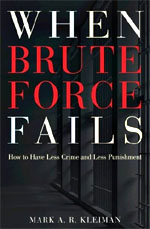 of the crime decrease of the 1994-2004 period.  A careful statistical study relating local changes in lead exposure to local crime rates estimates the fraction of the crime decline due to lead reduction as greater than 90%.

Mark’s book is focused on a particular strategy for reducing crime, so this topic gets only a couple of pages in a chapter on miscellaneous methods of crime control.  But surely it deserves more?1  If it’s really true that lead reduction was responsible for most of the post-1990 decrease in crime, and if changing demographics played a role as well, doesn’t that mean that everything else probably had almost no effect at all?  Broken windows, open-air drug markets, three-strikes laws, CompStat, bulging prison populations, etc. etc. — all of them together couldn’t have had more than a minuscule impact if lead and demographics explain almost everything.

I don’t really have a lot to say about this, actually.  Mainly I just wanted to highlight this passage because it’s pretty interesting.  It seems a little discouraging, though, if it’s really true that all our best efforts to reduce crime over the past couple of decades have had a collective impact only barely different from zero.

On the other hand, it certainly means that federal spending to eliminate lead from houses ought to be a no-brainer.  It would cost about $30 billion, but as Mark says, it would probably save us at least $30 billion per year in reduced crime.  The fact that Congress didn’t allocate this money long ago makes you wonder if maybe the Capitol building could use a lead abatement program of its own.2

1Of course it deserves more.  So here’s a bit more.

2The stimulus bill included $100 million for lead abatement, which is fine.  But considering just how effective lead reduction is on all sorts of policy levels, it’s sort of a crime that they couldn’t manage to dig up a little more than that out of an $800 billion total.