Bob Somerby wants to know why the media isn’t a wee bit more interested in why the United States pays far more per person for medical care than other rich countries.  Here’s the rough answer:

Underlying all this is the largely private, profit-driven nature of American medicine, but regardless of how you feel about that, the main lesson here is how hard it would be to seriously bring these costs down.  We can jabber all we want about incentives and greed and systemic waste, but the bottom line is that if we want to do anything more than nip around the edges, we’d have to pay doctors and nurses less, pay pharmaceutical companies less, pay insurance companies less (or get rid of them entirely), pay hospitals less, and pay device makers less.  That’s a lot of very rich and powerful interests 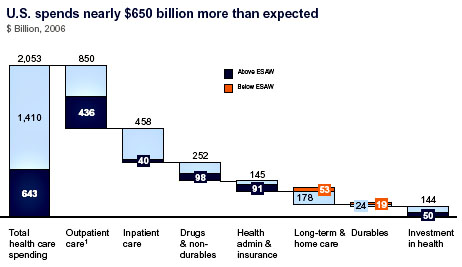 who will fight to the death to prevent any serious cost cutting, and it’s why Obama and the Democrats in Congress have largely chosen to buy them off instead.

If you’re curious about this in slightly more detail, the chart on the right comes from a McKinsey Global Institute study of healthcare costs.  (An older but more interactive version is here.)  Healthcare spending tends to be higher in richer countries, and since the U.S. is a very rich country it’s unsurprising that we spend a lot on healthcare.  However, even when you account for that, McKinsey figures that we still spend about $2,000 more per person than we should, a total of about $650 billion.  The chart shows where this extra expense comes from: the dark blue areas are places where we spend more than expected and the orange areas show where we spend less than expected.

No matter how you slice the healthcare pie, though, compared to other rich countries we spend far more, cover fewer people, get hassled a lot more, and don’t get much better outcomes.  Unfortunately, there are a lot of people who profit handsomely from this state of affairs, so it’s not likely to change radically anytime soon.  Baby steps, my friends, baby steps.