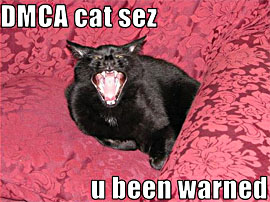 The long arm of the law has reached out and grabbed Brad DeLong by the throat:

Well, this is new. My first ever DMCA takedown notice — from HarperCollins, publisher of Levitt and Dubner’s Superfreakonomics. While other publishers these days are happy to have sample chapters of their authors’ works read and distributed on the internet, not so with HarperCollins.

One thing I can do in response is — tit-for-tat — to remove my praise of and link to E.M. Halliday’s Understanding Thomas Jefferson: there are other better (albeit longer) Jefferson biographies published by firms that have not sent me DMCA notices: read them instead.

I urge everybody — authors and readers alike — to just say no to HarperCollins in the future.

Well, what does everyone think about this?  My first reaction is: fair use excerpts aside, authors and publishers all have the right to decide whether they want large chunks of their material available for free on the internet.  If HarperCollins decides against that, fine.  There’s really no reason to be upset about it.

My second thought, though, is that I’d be plenty pissed off if HarperCollins did this to me without first sending me an email asking me to take down the offending material.  Hauling out the lawyers and the DMCA artillery is really uncalled for unless someone refuses a polite request first.

But I don’t know if that’s what happened.  Did HarperCollins ask first and shoot later, or was it the other way around?