Remember that Syrian nuclear plant that was destroyed by the Israeli air force in 2007?  I don’t quite remember who pointed me to this, but I’ve had a tab 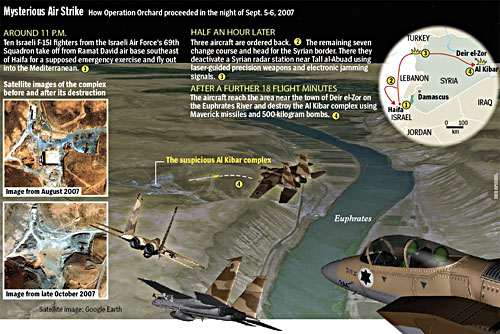 open all weekend to a recent Spiegel article about the whole affair — and after finally getting around to reading it, it turned out to be pretty interesting stuff.  Here’s the short version of how the plant was originally detected:

In the spring of 2004, the American National Security Agency (NSA) detected a suspiciously high number of telephone calls between Syria and North Korea, with a noticeably busy line of communication between the North Korean capital Pyongyang and a place in the northern Syrian desert called Al Kibar. The NSA dossier was sent to the Israeli military’s “8200” unit, which is responsible for radio reconnaissance and has its antennas set up in the hills near Tel Aviv. Al-Kibar was “flagged,” as they say in intelligence jargon.

….In late 2006…a senior Syrian government official checked into a hotel in the exclusive London neighborhood of Kensington. He was under Mossad surveillance and turned out to be incredibly careless, leaving his computer in his hotel room when he went out….The hard drive contained construction plans, letters and hundreds of photos. The photos, which were particularly revealing, showed the Al Kibar complex at various stages in its development….One of the photos showed an Asian in blue tracksuit trousers, standing next to an Arab. The Mossad quickly identified the two men as Chon Chibu and Ibrahim Othman. Chon is one of the leading members of the North Korean nuclear program, and experts believe that he is the chief engineer behind the Yongbyon plutonium reactor. Othman is the director of the Syrian Atomic Energy Commission.

….February 2007….An Iranian general [] decided to switch sides….Ali-Reza Asgari, 63, a handsome man with a moustache, was the head of Iran’s Revolutionary Guard in Lebanon in the 1980s and became Iran’s deputy defense minister in the mid-1990s….According to Asgari, Tehran was building a second, secret plant in addition to the uranium enrichment plant in Natanz, which was already known to the West. Besides, he said, Iran was apparently funding a top-secret nuclear project in Syria, launched in cooperation with the North Koreans.

….On an overcast night in August 2007 [] Israeli elite units traveling in helicopters at low altitude crossed the border into Syria, where they unloaded their testing equipment in the desert near Deir el-Zor and took soil samples in the general vicinity of the Al Kibar plant. The group had to abort its daring mission prematurely when it was discovered by a patrol. The Israelis still lacked the definitive proof they needed. However those in Tel Aviv who favored quick action argued that the results of the samples “provided evidence of the existence of a nuclear program.”

A month later, Israeli jets destroyed the Al Kibar facility.  The Israeli prime minister sent a message to the Syrians via Turkey that no further attacks were planned, and if they’d clam up about it, so would he.  They did.  Furthermore, Spiegel reports that Syrian President Bashar Assad has more recently “been considering taking a sensational political step. He is believed to have suggested to contacts in Pyongyang that he is considering the disclosure of his “national” nuclear program, but without divulging any details of cooperation with his North Korean and Iranian partners.”  North Korea and Iran are decidedly not excited about this prospect.

The sourcing for that last bit is obscure, so there’s no telling if it’s really true.  But the whole piece is worth a read.  It’s pretty good cloak and dagger stuff.