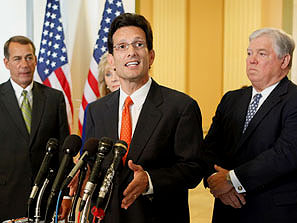 Medicaid matching rates, and child credits. Says Dave: “Attacking this stuff — and implying that a Republican majority would cut off these benefits — is something an opposition party can do, but something very hard to imagine a Republican congressional majority getting away with.”

Maybe.  But this morning on the Imus show Cantor doubled down:

We haven’t had a discussion in Washington this year about wealth creation, about job creation. It’s all been about trying to provide more safety net, trying to take from those who have been able to create wealth and opportunity and redistribute it. You know, that’s not the America that any of us know.

So there you have it: no help for the unemployed, just more tax cuts for the rich.  Sounds pretty Republican to me!

(What’s that? you say.  Cantor didn’t say anything about tax cuts for the rich?  Sure he did.  He just said it in code.  Read his statement again.)