The last major El Niño event occurred in 1997-98 and it produced a big temporary spike in global temperatures.  This has given climate deniers like George Will a field day: 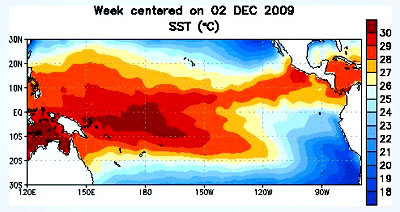 if 1998 was hotter than 2008, global warming must be a hoax!  This is ridiculous, of course: El Niño events happen every five years or so (the 2004 El Niño was a smallish one) and choosing one of those years as your baseline for temperature activity is like choosing 2000 as a baseline for dotcom activity.

Well, El Niño is back, and this year’s version looks like it’s going to be at least a moderate strength occurrence lasting through next summer.  This means that temperatures are likely to spike over the next 12-18 months, and that in turn means that even with the sun in a deep solar minimum, next year might set a new warming record:

The current El Nino is forecast to get stronger, probably pushing global temperatures even higher next year, scientists say. NASA climate scientist Gavin Schmidt predicts 2010 may break a record, so a cooling trend “will be never talked about again.”

Unfortunately, this is wishful thinking.  If 2010 really is hotter than 1998, I suspect that deniers will suddenly discover the virtue of not relying on a single year that’s strongly affected by decadal oscillations.  They’re clever that way.