Ezra Klein calls it “winning ugly,” but a win’s a win: early this morning the Senate voted 60-39 to pass its healthcare reform plan, only the second time in American history that a healthcare bill of this magnitude has even reached the Senate floor. Next stop: a House-Senate conference committee after the winter recess and then one final vote for all the marbles, probably in late January.

So why do I not feel more elated? Part of the reason is that in the modern era of the institutional filibuster, 60 votes is a paper-thin margin and there’s still a chance that someone 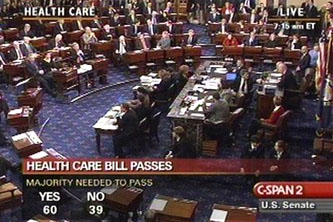 could come back from recess bloodied and beaten up and looking for a pretext to change their vote. The conference report might give them an excuse, and that would mean healthcare reform dies again.

But I think that’s unlikely. The bigger reason, of course, is that healthcare has splintered the liberal movement so badly. There’s a far-left wing so obsessed with the demise of the public option that it’s working overtime to team up with reactionaries to destroy the bill and — maybe — Obama’s presidency along with it. The more moderate left supports the bill, but hardly enthusiastically. For us, it’s a “starter house,” or “the best we could get.” That’s not exactly a rallying cry. And independents are just confused and exhausted by months of political sniping, intra-left bickering, and the relentless flood of Beck/Palin/Drudge demagoguery.

So it doesn’t feel much like a victory yet. But it should. I’m 51 years old and this bill is, without question, the biggest progressive advance in my adult life. You have to go back to the great environmental acts of the early 70s to get close, and to the civil rights/Medicare era to beat it. That’s four decades, the last three of which have constituted an almost unbroken record of conservative ascendency. And now that ascendancy is just days away from being — finally, decisively — broken. Warts and all, we’re on the cusp of passing a bill that provides all of this:

A trillion dollars in benefit for low and middle income workers. 95% of Americans insured. Medical bankruptcies on the verge of disappearing. And for the first time ever, an acknowledgement that decent healthcare ought to be universal in the United States. This is historic. This is a cause for celebration, not recriminations. As recently as 2005, I wasn’t sure I’d ever see this day, and now, a mere three years later, it’s here. I can still hardly believe it.

UPDATE: Some good thoughts in a similar vein here from Jon Chait.