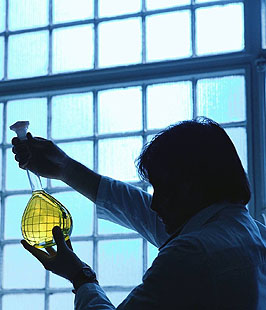 Via Matt Yglesias, here is economist Maxine Udall (who apparently refers to herself in the third person) talking about the long-term effects of the three-decade financialization of America that began in the early 80s:

Maxine suspects that the longest term and most severe damage from the finance casino will not be from government deficits required to shore up too-big-to-fail banks and insurers. It will be from two powerful, long-standing price distortions that have distorted the composition of our labor force and the mix of human capital within it. The first distortion is the past diversion of some our best technical and mathematical minds away from physics, engineering, biology, chemistry, and, yes, even economics, to financial modeling, risk analysis, and all the other marvelous tools of speculation and gaming. Over the last 20 years or so, the financial sector has been diverting our future scientists and mathematicians into creating new derivatives aimed at managing risk (ha!) and into developing creative investment instruments aimed at obscuring risk.

The second long-term distortion is similar to the first. Maxine is thinking of all those bright, young, energetic people who came out of some of our best universities and opted to go to work for investment banks, not in technical jobs, but as traders, ratings specialists, analysts, again to support the conversion of trillions of dollars into chaff.  Many of them might have gone on to graduate degrees in chemistry, biochemistry, physics, engineering, biology or medicine.

I think this is right, but I’ve long thought that it’s also slightly wrong in a way that’s (just barely!) worth a blog post. Here’s the thing: the raw number of hot shot physicists who defected to Wall Street is actually fairly small, and probably didn’t really affect the field of physics in any measurable way.  And my guess is that, in general, the kind of person who’s interested in high finance isn’t the same kind of person who’s interested in mass spectrometers and Erlenmeyer flasks. So I have my doubts that the siren song of Wall Street has really done significant damage to our technical and scientific sectors.

But the kind of person who’s interested in high finance (and big paydays) is the kind of person who’s also interested in starting up a hot new company or becoming a star manager in an existing corporation that makes actual goods and services that people use. That’s where I suspect the damage has really been done. No matter what you think of Google or IBM or Ford Motor, they’re good for the economy in a way that Goldman Sachs and the Blackstone Group just aren’t. If they lose the tippy top 1% of the young men and women who are temperamentally interested in the corporate world, then their businesses become just slightly less better run, slightly less visionary, and slightly less ambitious. And on the flip side, all that brainpower is put to work in ways that, at best, seems to add no social value to garden variety banking, and at worst makes it actively more dangerous.

One of America’s strengths has long been its deep and strong venture capital network, and obviously we still have plenty of bright people eager to take a flyer on a new idea. But startup firms are hugely sensitive to talent (and, yes, luck), and the loss of the very best startup talent can make the difference between a success rate of 3% and a success rate of 5%. That’s a lot of Microsofts. And that’s what we lose when we allow Wall Street to become so insanely lucrative.