In the New York Times today, David Leonhardt writes what should be obvious: last year’s stimulus bill, though not perfect, has been a smashing success:

Just look at the outside evaluations of the stimulus. Perhaps the best-known economic research firms are IHS Global Insight, Macroeconomic Advisers and Moody’s Economy.com. They all estimate that the bill has added 1.6 million to 1.8 million jobs so far and that its ultimate impact will be roughly 2.5 million jobs. The Congressional Budget Office, an independent agency, considers these estimates to be conservative.

….Around the world over the last century, the typical financial crisis caused the jobless rate to rise for almost five years, according to work by the economists Carmen Reinhart and Kenneth Rogoff. On that timeline, our rate would still be rising in early 2012. Even that may be optimistic, given that the recent crisis was so bad. As Ben Bernanke, Henry Paulson (Republicans both) and many others warned in 2008, this recession had the potential to become a depression.

For partisan political reasons, Republicans find it in their interest to insist that the stimulus was just a boondoggle that hasn’t created a single job. The fact that this frequently gets reported with a straight face is a black mark for the press, which ought to insist on its sources being a wee bit more reality-based if they want to be quoted without being immediately debunked in the following paragraph.

The chart below from Organizing For America tells the real story. We still have a long way to go before job growth is back to normal, but the stimulus is getting us there a lot faster than we would have gotten there otherwise. 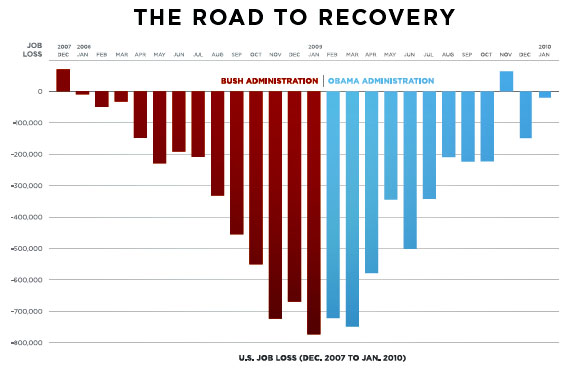