Since Bruce Bartlett has gone to the trouble of making a nice chart out of the latest Kos/Research 2000 poll, it would be churlish of me not to steal it. So here it is. Source data here. Cliff Notes version: Republicans are nuts.

But let’s look on the bright side. Only 23% of Republicans want to secede from the union. Not bad! Only 21% think ACORN was able to pillage the 8 million votes it would have taken to steal the 2008 election. Reality based! And be honest: Sarah Palin does have more executive experience than Barack Obama. Especially now that she’s managed that book tour. So there’s nothing wrong with thinking she’s better qualified to be president. 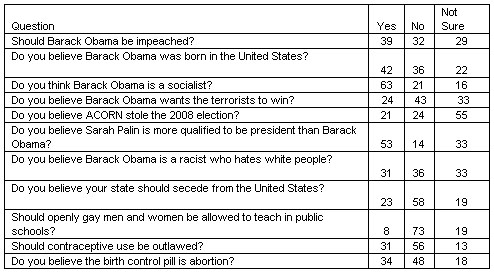