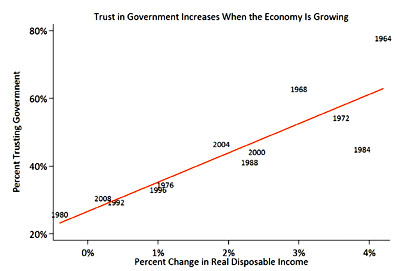 After Vietnam and Watergate, American trust in government plummeted. But how about since then? Has trust continued to decline? John Sides says it’s actually gone up and down since the 60s, influenced largely by one thing:

What drives the trend in political trust? By and large, it is the economy. People trust government when times are good. They don’t trust it when times are bad. For the presidential election years from 1964-2008, I merged the trust measure with the change in per capita disposable income, courtesy of Douglas Hibbs….The relationship is striking. The economy explains about 75% of the variance in trust. If you delete 1964, which looks like a potential outlier, the economy still explains 73% of the variance.

In a way, this isn’t surprising. It certainly gibes with the well-known fact that presidential elections are largely driven by incumbency and the economy and not much else.

But I have to confess that this one of those results I prefer not to focus on too much. It’s sort of like talking about how important luck is in life results. It might be true, but it also induces a sort of fatalism that can be damaging in the long run. It’s good for society if people think they have more control over their destiny than they do, and it’s good for politicians to think there are things they can do to make people better off and increase their own chances of reelection. If incumbency and the economy are pretty much all there is to it, why bother spending time on actual legislation? It’s just a bunch of hard work that probably won’t pay off anyway.

And it probably won’t. But let’s keep quiet about that.