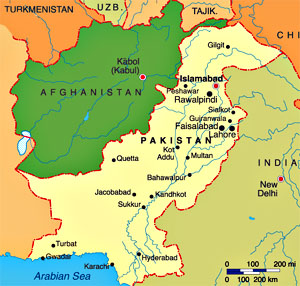 Following up on yesterday’s post about the capture of Taliban leaders in Pakistan, the New York Times fills in some details about increased cooperation between Pakistan’s ISI and the CIA:

Interviews in recent days show how they are working together on tactical operations, and how far the C.I.A. has extended its extraordinary secret war beyond the mountainous tribal belt and deep into Pakistan’s sprawling cities.

Beyond the capture of Mullah Abdul Ghani Baradar, C.I.A. operatives working with the ISI have carried out dozens of raids throughout Pakistan over the past year, working from bases in the cities of Quetta, Peshawar and elsewhere, according to Pakistani security officials. The raids often come after electronic intercepts by American spy satellites, or tips from Pakistani informants — and the spies from the two countries then sometimes drive in the same car to pick up their quarry.

….And yet for two spy agencies with a long history of mistrust, the accommodation extends only so far….Even as the ISI breaks up a number of Taliban cells, officials in Islamabad, Washington and Kabul hint that the ISI’s goal seems to be to weaken the Taliban just enough to bring them to the negotiating table, but leaving them strong enough to represent Pakistani interests in a future Afghan government.

This contrasts sharply with the American goal of battering the Taliban and strengthening Kabul’s central government and security forces, even if American officials also recognize that political reconciliation with elements of the Taliban is likely to be part of any ultimate settlement.

Italics mine. However, Spencer Ackerman suggests that far from being as sharp as the Times suggests, “the strategic differences here may be ones of degree.” This seems like the better guess. Both sides now agree that the Taliban needs to be seriously beaten up, and at most, the argument is over just how much to beat them up in order to get them to sue for peace. Not only is that not a huge difference, but it’s one that both sides will legitimately find difficult to calibrate anyway. If that’s really the extent of their disagreement — admittedly a big if — there’s a real glimmer of progress here.