I’m going to take my life in my hands and defend David Broder today.  After watching 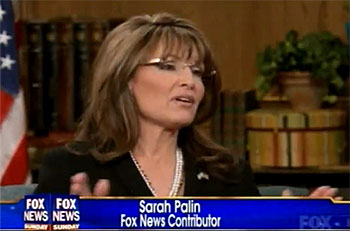 Sarah Palin’s speech in Nashville and her Sunday talk show appearance with Chris Wallace, he writes:

The snows that obliterated Washington in the past week interfered with many scheduled meetings, but they did not prevent the delivery of one important political message: Take Sarah Palin seriously.

….Her invocation of “conservative principles and common-sense solutions” was perfectly conventional. What stood out in the eyes of TV-watching pols of both parties was the skill with which she drew a self-portrait that fit not just the wishes of the immediate audience but the mood of a significant slice of the broader electorate.

….Palin did not wear well in the last campaign, especially in the suburbs where populism has a limited appeal. But when Wallace asked her about resigning the governorship with 17 months left in her term and whether she let her opponents drive her from office, she said, “Hell, no.”

Those who want to stop her will need more ammunition than deriding her habit of writing on her hand. The lady is good.

I can’t see into Broder’s heart. Maybe he actually likes Palin. But his column never really says that. What he says is that (a) she has a natural talent for appealing to a certain kind of disaffected voter, and (b) there are a lot of disaffected voters out there right now. “The lady is good” sounds to me more like a warning than a personal opinion.

Now, it so happens that I disagree about how seriously to take Palin. There was a short window of time when I figured that she might bone up a bit on substantive issues and then meld her instinctive populism with just enough additional gravitas to make her a serious threat. But as near as I can tell, she has no intention of doing that. She’s sticking with pure right-wing populism, and that just doesn’t appeal to enough people to get her to the White House. If by some miracle she wins the Republican nomination in 2012, she’ll be the 21st century version of Barry Goldwater, not the 21st century version of Ronald Reagan.

Still, maybe Goldwater would have succeeded if he’d been more telegenic and had run during a time of 10% unemployment. You never know. And I know plenty of fellow liberals who think I should take Palin more seriously too. It’s hardly an outrageous opinion.