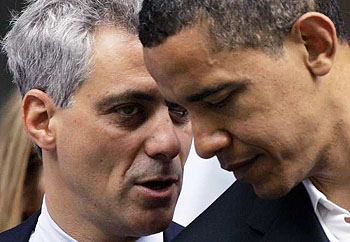 If you hate Rahm Emanuel — and I know lots of you do — you’re going to love Edward Luce’s Financial Times piece that blames Barack Obama’s reliance on a small inner circle of aides for his first-year growing pains:

In dozens of interviews with his closest allies and friends in Washington — most of them given unattributably in order to protect their access to the Oval Office — each observes that the president draws on the advice of a very tight circle. The inner core consists of just four people — Rahm Emanuel, the pugnacious chief of staff; David Axelrod and Valerie Jarrett, his senior advisers; and Robert Gibbs, his communications chief.

….Administration insiders say the famously irascible Mr Emanuel treats cabinet principals like minions. “I am not sure the president realises how much he is humiliating some of the big figures he spent so much trouble recruiting into his cabinet,” says the head of a presidential advisory board who visits the Oval Office frequently. “If you want people to trust you, you must first place trust in them.”

In addition to hurling frequent profanities at people within the administration, Mr Emanuel has alienated many of Mr Obama’s closest outside supporters. At a meeting of Democratic groups last August, Mr Emanuel described liberals as “f***ing retards” after one suggested they mobilise resources on healthcare reform.

“We are treated as though we are children,” says the head of a large organisation that raised millions of dollars for Mr Obama’s campaign. “Our advice is never sought. We are only told: ‘This is the message, please get it out.’ I am not sure whether the president fully realises that when the chief of staff speaks, people assume he is speaking for the president.”

This comes via Steve Clemons, who says Luce’s observations aren’t getting as much currency as they should:

This Luce piece is unavoidably, accurately hard-hitting, and while many of the nation’s top news anchors and editors are sending emails back and forth (I have been sent three such emails in confidence) on what a spot-on piece Luce wrought on the administration, they fear that the “four horsepersons of the Obama White House” will shut down and cut off access to those who give the essay ‘legs.’

….President Obama needs to take stock quickly. Read the Luce piece. Be honest about what is happening. Read Plouffe’s smart book again. Send Rahm Emanuel back to the House in a senior role. Make Valerie Jarrett an important Ambassador. Keep Axelrod — but balance him with someone like Plouffe, and get back to putting good policy before short term politics.