The Washington Post reports today that both liberals and conservatives are in favor of compromise on healthcare — as long as the other guys are the ones doing the compromising. It’s a start! The results aren’t quite even, though:

But even Republicans are critical of their congressional leadership, with 44 percent seeing them as doing too little to strike deals with Obama; that compares with just 13 percent of Democrats worried about inaction on Obama’s part. 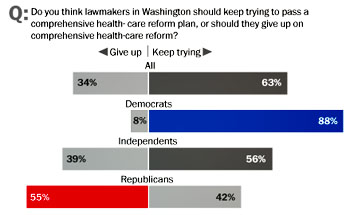 That’s something to work with. The Fox News wing of the Republican Party obviously isn’t in the mood for compromise, but this is a reminder that there’s still a quieter, non-Fox wing that would like to see some things get done. And as the chart on the right shows, 63% of the country thinks “lawmakers in Washington” should keep trying to pass comprehensive healthcare reform, including 42% of Republicans and a firm majority of independents. It’s not clear what all these people think they’re signing up to when they say they want “comprehensive” reform, but that’s still a pretty healthy level of support. At the very least it should help stiffen a few Democratic spines in Congress.