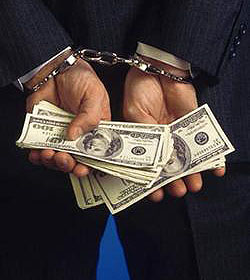 Some facts for your consideration:

Fact 1: If you trade stocks based on insider knowledge (for example, maybe you know that next week’s earnings announcement will be disappointing), that’s illegal.

Fact 3: Credit default swaps are basically insurance on bonds. So buying or selling CDS coverage based on insider knowledge is illegal too. Right?

Felix Salmon explains further here and then says maybe we ought to do something about this:

The first obvious thing that needs to be done here is to give the SEC formal jurisdiction over single-name CDS….The second thing which ought to be considered is moving CDS trading onto an exchange, where it can be regulated. And it’s almost certain, at this point, that that’s not going to happen. In fact, I asked Craig Donohue, the CEO of CME Group, about this at yesterday’s Reuters Global Exchanges and Trading Summit. He’s very keen on clearing over-the-counter CDS trades, but he said that he’s come to the decision over the past couple of years that he’s not interested in listing CDS on any of his exchanges directly. The big CDS players are his clients, they make lots of money from their OTC trading, and he seems to have no appetite to start competing with them on that front, rather than simply facilitating the clearing of their trades.

Financial regulatory reform is looking better all the time, isn’t it? No serious capital or leverage requirements. A consumer protection agency housed at the Fed and barely worth the paper it’s implemented on. And no exchange trading of CDS because the exchanges don’t want to do it and Congress probably won’t force them to. I don’t know about you, but I’m about ready to say we should just scrap the whole thing and admit that we’re OK with Wall Street plutocrats continuing to run the country for their own benefit until they destroy the country properly. At least that would have the virtue of honesty.

And by the way: Felix will shoot me for saying this, but I’ve pretty much come to the conclusion that credit default swaps should simply be banned. Their benefits are actually pretty minimal, while their vulnerability to abuse seems almost unlimited. I’m having a harder and harder time these days buying the case that we can regulate them into submission.