I think I’ve blogged about this before, but Alyssa Katz has a good piece today about how Texas generally avoided the housing bubble that afflicted the rest of the country and nearly destroyed Wall Street. The key, she says, is that Texas had uniquely stringent regulation of home equity loans:

As home prices skyrocketed in many markets, cash-out refinancings became standard, even in the relatively sober world of Fannie Mae and Freddie Mac. By 2006, Freddie Mac reported that 88 percent of refinance mortgages that it purchased were for amounts at least 5 percent higher than borrowers’ previous loan balances. Subprime, in insane pursuit of risk, piled on with cash-out refinances for high-risk borrowers, often approaching the entire appraised value of the home.

But not in Texas. A borrower there can secure a home-equity line of credit from a bank. And she can refinance her mortgage or take out a home-equity loan. But the total amount of debt on a home cannot exceed 80 percent of its appraised 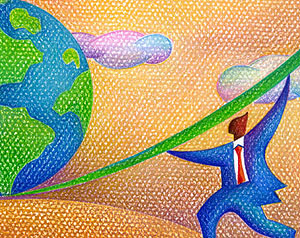 value, and any proceeds cannot be used to pay off other debts.

This is, you’ll note, essentially a limit on leverage. In this case, though, it’s not a limit on bank leverage, but on individual homeowner leverage. It’s a good example of how leverage is shot through our entire financial system, and how reining it in at one level can have a big impact on every other level as well.

But there’s more to Texas than just their regulation of HELOCs. State law also prohibits mortgage loans with prepayment penalties. And it prohibits negative amortization loans, where the principal you owe goes up over time because you’re not required to make full interest payments. There are also limits on balloon payments and requirements that mortgage lenders take into account the borrower’s ability to repay a loan. (Shocking, I know.)

My guess is that these latter restrictions, especially the ban on prepayment penalties and negative amortization loans, were actually more important than the HELOC restrictions. Prepayment penalties were a key part of the mortgage madness of the past decade, since the most egregious subprime and Alt-A loans only worked if you were penalized for paying off your loan early. You can hardly afford to offer loss-leader teaser rates, after all, if the borrower can just enjoy the low payments for a couple of years and then refinance into a standard mortgage with no penalty, leaving the lender with the losses on the first two years of the loan.

Bottom line: there are several common-sense changes to home mortgage regulations that would go a long way toward stabilizing the housing market in the future. The 80% HELOC rule is a good one. Banning prepayment penalties is another. Requiring a minimum 10% down payment for all home loans would be useful too — as well as making sure that brokers don’t use “silent seconds” to get around this rule. All of these regs would not only be good for consumers, they’d help keep a lid on housing prices as well. And remember: it was skyrocketing housing prices that underlay everything else that happened during the past decade. It’s too bad that no one at the federal level seems much interested in doing any of this stuff, isn’t it?