Bruce Bartlett makes a long argument today that conservatives should have (quietly, one presumes) supported Hillary Clinton during the Democratic primary 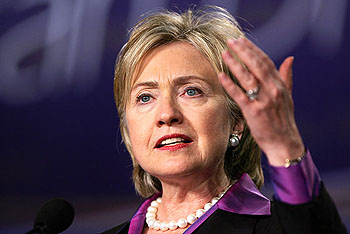 I think the evidence suggests that Hillary Clinton could have won the Democratic nomination with just a little bit more support, and probably would be governing significantly more conservatively than Obama. For one thing, given her disastrous experience with health care reform in 1993-1994, it’s reasonable to assume that she would have stayed away from that issue at all costs.

Well, we’ll never know, will we? But my guess is just the opposite. I think Hillary was, if anything, more dedicated to healthcare reform than Obama, and I think she would have taken it on more vigorously than he did. What’s more, my guess is that her better feel for the Senate and past failure with healthcare reform would have made her more effective at getting a package passed. It probably would have looked about the same as what we got (her position during the campaign was similar to Obama’s and most of the work was done by Congress anyway), but I suspect that she would have been a little more aggressive about pushing it through more quickly. Contra Bruce, we might have gotten healthcare reform last fall instead of last month.

But! Who knows? Maybe the economy would have spooked her. Maybe Bill would have convinced her to wait until 2011. Maybe the townhall madness of summer would have stopped her short. But I think the conservative myth of the allegedly principle-less, endlessly calculating Hillary has led Bruce astray here.