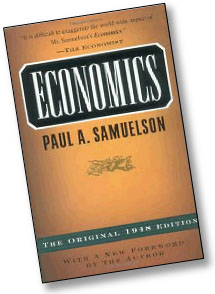 I had no idea that the MIT economics visiting committee tried to force Samuelson to call off the publication of his 1948 textbook, on the grounds that Keynesian economics was too left-wing.

As it happens, I just finished reading Yves Smith’s Econned, and she talks about this episode early in her book. As a public service, here’s her synopsis:

A Canadian student of Keynes, Lorie Tarshis, published an economics textbook in 1947, The Elements of Economics, which included his interpretation of Keynes. It also suggested that markets required government support to attain full employment. It was engaging and well written, and sold well initially, but fell off quickly, the victim of an organized campaign by conservative groups to have the textbook removed. The book, and by implication Keynes, was inaccurately charged with calling for government ownership of enterprise.

Any taint of Communist leanings would damage the career of a budding academic. So aside from his refusal to accept some fundamental elements of Keynes’s construct, Samuelson had another reason to distance himself from the General Theory. Samuelson said he was well aware of the “virulence of the attack on Tarshis” and penned his text “carefully and lawyer like” to deflect similar attacks.

More about Tarshis and Samuelson here. It includes the phrase “that bastard Buckley” just to spice things up a bit.