Last week the CMS actuary released a report about the cost of healthcare reform that seemed to come to more negative conclusions than the CBO. I didn’t post about it because, to a first estimate, it seemed pretty similar to the CMS actuary’s report from last November. We already went through a big left-right brouhaha about what it meant back then, and I didn’t really feel like going through it again.

But Jim Lynch, a professional actuary who I’ve corresponded with before, was annoyed that no one was really trying to compare the CMS and CBO reports on an apples-to-apples basis, so he went ahead and did it himself. Result: contrary to what you may heard, it turns out they both pretty much agree with each other. He’s got the overall results in both table and chart form, so naturally I’m reproducing the prettier chart here. You can click the link for the whole story, but here’s the meat of it:

The table tells you that the two arbiters were within 1% on the cost of new coverage — stuff like Medicaid and CHIP expansion. CBO saw things slightly 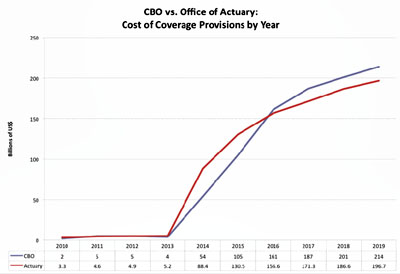 rosier than the Office of the Actuary. It also tells you that the actuarial office projected more cost savings and a lower net cost than the CBO did,

….If anything, the Office of the Actuary seems to like the bill more than CBO. This is particularly true if you look at coverage cost by year, as the following chart does….The table shows that the costs don’t really start building until 2014. For the first two years, the actuaries project higher costs, as the red line is above the blue one. But starting in 2016, the actuaries project lower costs. That’s why the red line falls below the blue one.

To summarize: The actuaries project lower coverage costs overall, and they project costs to decelerate faster than CBO does.

It’s worth noting that a big part of the supposed disagreement between CBO and CMS involves the question of whether the cost saving measures in the healthcare bill will work. But that’s an issue where neither agency really has any more expertise than anyone else. It’s mostly a question of pure political will, and on that score your guess is as good as mine — or theirs.