Over at the Corner, Ed Whelan runs down a list of reasons to oppose Elena Kagan’s nomination to the Supreme Court. In a nutshell, they are (1) she has no judicial experience, (2) she’s an Obama crony, (3) Goldman Sachs, (4) she opposed military recruiting at 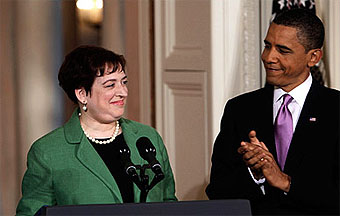 Harvard because of DADT, (5) she has a thin written record, (6) aside from national security issues she’s probably a garden variety liberal, and (7) we need to see her records from the Clinton White House.1

I consider this basically good news for Kagan. I assume this is a decent summary of all the available conservative oppo research on Kagan, and there’s nothing new here. Hell, most of it has already been hashed out by the left, let alone the right. So this suggests that conservatives don’t have anything more than this, and all they can hope for is that they get their hands on something juicy when Obama turns over Kagan’s Clinton-era records. Which, frankly, seems unlikely given Kagan’s obviously cautious nature even in private. The odds are pretty long that anything seriously embarrassing is lurking there.

If it turns out that Whelan’s list is all they have, I doubt that conservative objections will gain even a little bit of traction. It’s a nothingburger. She’ll be donning her robe and hiring clerks by summer.

1Plus she’s a bad driver. If Whelan is that desperate, there really must not be anything better he can come up with.