Last night Rand Paul, fresh off his primary victory in Kentucky, explained that he didn’t support the Civil Rights Act of 1964. “I think it’s a bad business decision to exclude anybody from your restaurant,” he said in an interview, “but, at the same time, I do believe in private ownership.” And if private lunch counter owners want to prevent blacks from eating there, that’s their right. “This is the hard part about believing in freedom.”

Bruce Bartlett, hardly an enemy of the free market, goes to town:

In 1883 the Supreme Court, then in its most libertarian phase, knocked down the 1875 [Civil Rights] act as well as many other Republican measures passed during Reconstruction designed to aid African Americans. The Court’s 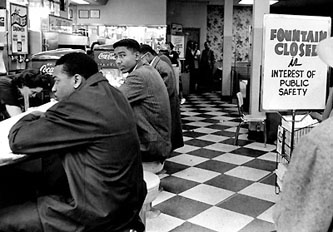 philosophy in these cases led logically to Plessy v. Ferguson in 1896, which essentially gave constitutional protection to legal segregation enforced by state and local governments throughout the U.S.

….The libertarian philosophy of Rand Paul and the Supreme Court of the 1880s and 1890s gave us almost 100 years of segregation, white supremacy, lynchings, chain gangs, the KKK, and discrimination of African Americans for no other reason except their skin color. The gains made by the former slaves in the years after the Civil War were completely reversed once the Supreme Court effectively prevented the federal government from protecting them. Thus we have a perfect test of the libertarian philosophy and an indisputable conclusion: it didn’t work. Freedom did not lead to a decline in racism; it only got worse.

….Rand’s position is that [the Civil Rights Act] was wrong in principle in 1964. There is no other way of interpreting this except as an endorsement of all the things the Civil Rights Act was designed to prohibit, as favoring the status quo throughout the South that would have led to a continuation of segregation and discrimination against African Americans at least for many more years. Undoubtedly, changing mores would have broken down some of this over time, but there is no reason to believe that it would have been quick or that vestiges wouldn’t still remain today. Indeed, vestiges remain despite the Civil Rights Act.

Bartlett’s recommendation: “I believe that Rand should admit that he was wrong as quickly as possible.” It’s good advice. I’ll bet Rand Paul doesn’t take it.

UPDATE: I’m playing catchup here. Sorry. Here’s Rand Paul’s latest statement: “Let me be clear: I support the Civil Rights Act because I overwhelmingly agree with the intent of the legislation, which was to stop discrimination in the public sphere and halt the abhorrent practice of segregation and Jim Crow laws.”

OK. But why did he say otherwise yesterday? Inquiring minds want to know.