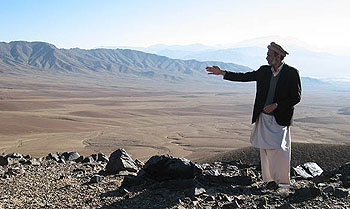 As James Risen notes in his New York Times piece today about Afghanistan’s newfound trillion-dollar mineral wealth, it’s not really newfound. The Soviets knew about it two decades ago, the Afghans have known it about it for nearly as long, and survey flights confirmed it a couple of years ago. So why is everyone suddenly anxious to talk about it on the record now? Is it just a coincidence that this is happening at the same time that the U.S. is obviously struggling in its counterinsurgency campaign? Marc Ambinder pushes back hard today:

The way in which the story was presented — with on-the-record quotations from the Commander in Chief of CENTCOM, no less — and the weird promotion of a Deputy Assistant Secretary of Defense to Undersecretary of Defense suggest a broad and deliberate information operation designed to influence public opinion on the course of the war.

….The general perception about the war here and overseas is that the counterinsurgency strategy has failed to prop up Hamid Karzai’s government in critical areas, and is destined to ultimately fail. This is not how the war was supposed to be going, according to the theorists and policy planners in the Pentagon’s policy shop.

What better way to remind people about the country’s potential bright future — and by people I mean the Chinese, the Russians, the Pakistanis, and the Americans — than by publicizing or re-publicizing valid (but already public) information about the region’s potential wealth? The Obama administration and the military know that a page-one, throat-clearing New York Times story will get instant worldwide attention. The story is accurate, but the news is not that new; let’s think a bit harder about the context.

More here from James Ridgeway, who says the mineral announcement “is not news and looks like an Obama PR campaign to buttress US involvement in the war.” And always remember: if there’s one thing that we know the Petraeus-era Pentagon is good at, it’s PR campaigns.