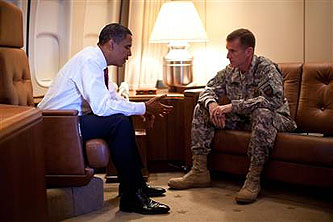 So, um, how are things going in Afghanistan?

An article out this week in “Rolling Stone” magazine depicts Gen. Stanley McChrystal as a lone wolf on the outs with many important figures in the Obama administration and unable to convince even some of his own soldiers that his strategy can win the war. A band of McChrystal’s profane, irreverent aides are quoted mocking Vice President Joe Biden and Richard Holbrooke, the special U.S. representative for Afghanistan and Pakistan.

….The article claims McChrystal has seized control of the war “by never taking his eye off the real enemy: The wimps in the White House.”

Ouch. The Wall Street Journal describes the piece this way:

Comments in the article attributed to anonymous McChrystal aides are particularly harsh towards some senior members of the Obama administration, including National Security Adviser James Jones, and other leading politicians, like Sens. John Kerry (D., Mass.) and John McCain (R., Ariz). They also make some unflattering references to President Barack Obama himself, saying the president didn’t seem to know who McChrystal was when he appointed him to run the war early last year.

Apparently McChrystal’s biggest beef is with Karl Eikenberry, which is hardly surprising since Eikenberry leaked a cable last year that essentially said McChrystal’s strategy for Afghanistan was hopeless. Marc Ambinder provides some background here, and ends with this: “Within hours after today’s Rolling Stone story broke, McChrystal was called by the White House, the Secretary of Defense, and the Chairman of the Joint Chiefs of Staff. They were not happy.” I don’t suppose they were.