Health coverage in the far more influential mainstream press did very little to serve the public interest and as the debate progressed, Americans became more, not less, confused about the policy. “A solid majority of Americans consistently said the health care debate was hard to understand — a number that increased from 63% in July 2009 to 69% in December 2009, according to surveys from the Pew Research Center for the People & Press.”

Actually, it’s pretty natural that people would become more confused as time goes by no matter how good or bad the coverage was. Hell, I was more confused as time went by. Proposals come and go, amendments are offered and rejected, negotiation sessions drag on, studies are issued, and as the broad outlines take shape small details become ever more important. But there’s more to it than that, as another part of the Pew study demonstrates:

To a great extent, the health care debate was a talk show story, getting the most attention from the ideological cable and radio hosts.

….In the talk show sector, the subject was more than twice as big as it was in the media overall, filling 31% of the airtime from June 2009 through March 2010 versus 14% generally. On those shows, no other subject was deemed nearly as newsworthy. The No. 2 talk story in that time frame was the economy, all the way back at 7%.

….A month-by-month breakdown of health care coverage in the talk show sector reveals a major increase during the dog days of summer. In August, when the town hall protests exploded, 60% of all the talk show airtime 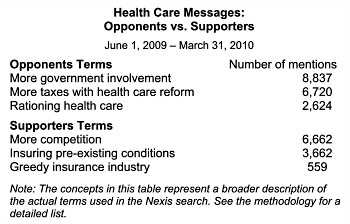 was devoted to health care. (The second-biggest talk show topic, terrorism, was at 5% that month). In September, health care filled 39% of their airtime, and in October, it was still high at 30%.